Scroll down for more

The oldest building dates from about 1550

The four great Georgian bow windows that distinguish The Swan Hotel at Stafford represent only part of a fascinating architectural history, which also encompasses the hotel’s two immediate neighbours. Thought to be the town’s first brick building, The Swan was constructed in the early 1600s as a grand private mansion, becoming an inn from at least the start of the English Civil War in 1642. It was remodelled in the Georgian style in the late 1700s, as it expanded to become one of the town’s leading coaching inns.

Immediately next door, the upper floors of Shaw House have long been incorporated within The Swan Hotel. It’s the oldest of the three adjacent buildings, dating from about 1550. Inside, guests can admire its magnificent, ornately carved, Jacobean staircase. Next door again is the sensational Ancient High House, now a museum, which is said to be one of the largest surviving timber-framed buildings in England. For most of the 1900s it was also part of The Swan Hotel. An expert in historic buildings wrote: ‘I doubt if there are three adjacent buildings still standing that can illustrate 250 years of architectural change by such splendid examples as these.

At the time of its Georgian make-over, The Swan capitalised on the growth of Stafford as a staging post on the busy road linking the industrial centres of Birmingham and Wolverhampton with those of Manchester and Liverpool. And when in 1837 a railway station was opened in Stafford on the same route, The Swan responded the best, effectively putting its main former coaching-inn rivals out of business. Adapting to change continued to be a hallmark of The Swan during the emergence of the motor car in the early 1900s, and through the evolving demands of the market ever since.

Sign up for our latest news and special offers

Chat to our online team

Book now and get our best rates

Stay in one of our rooms

Enjoy a meal in our restaurant

Book a table bigger than 10

Treat someone you know 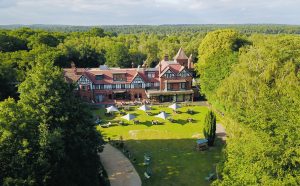